Welcome to the PRSONAS Blog 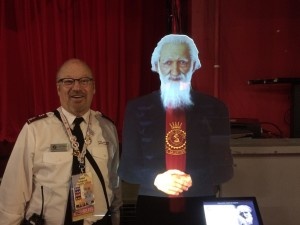 How do you capture the attention of a room full of super-smart scientists, professors or engineers? Put Einstein on your team.

Yes, Einstein, the original “Brains are Sexy”, ENERGY, MASS, SPEED OF LIGHT, ROCK THE UNIVERSE AS WE KNOW IT guy.

Well, he can still rock the house.

And he did just that at trade conference in London this spring.

Einstein (circa 2013) was a Virtual Presenter with Personality enlisted by Norvo Nordisk, the international pharmaceutical company.

Not so for Virtual Presenters with Personality like Einstein.  What they do so brilliantly is interact with customers in the physical world:  settings like retail, hospitality and healthcare, just to name a few.

The key action here is ENGAGEMENT.   Virtual Presenters with Personality are programmed for human- like exchanges with audiences and customers.

They are hard to resist.

After engagement, the rest is almost easy.  Deliver the brand message and collect those priceless, web-quality analytics—something that hasn’t happened in the physical world before.

These personality-driven presenters are the results of a unique combo of talented human beings and advance computer programming that has its roots in the gaming industry.

An actor portrays the famous and/or historical figure in a video shoot. (In the Einstein example, he nailed it, right down to the iconic hair.)   Then a combination of superior artificial intelligence and superior computer generated graphics complete the Virtual Presenter with Personality package.

For example:  Also on the Norvo Nordisk bill (this time at an executive conference in Copenhagen) were virtual recreations of the two company founders at that dramatic, breakthrough moment in the 1920s when they first realized what a  reliable source of insulin could mean to the world.

Unforgettable--which may be the loveliest word in the marketing and communications professions.

Makes you want to stop and think about the story your company or brand has to tell and how you can tell it with personality.

BTW,   many historical figures like Einstein and Abraham Lincoln are considered public domain, meaning their likeness can be used license-free without restriction.  Others, Elvis and John Lennon for example, must be licensed for a fee.    So before you go too far down one path or story line, it’s a good idea to give the legal department a call.  After that, the sky’s the limit.

PRSONAS™ is the perfect fit to educate & aid in obtaining consent for clinical trials. See our partnership with Research Triangle Institute International.

Active learning, machine learning, what's the difference? PRSONAS uses one of them creating human-like engagement and showing the power of personality.

Planar Is the Perfect Pairing for Our Practically Perfect PRSONAS