Google Demo Day - Why a Loss Is Still a Win!

To start this off, I’d like to share some words I live by: “true strength isn't about winning. It's about getting back up when you fall down.” Now, you might think that’s weird because I got it from a children’s cartoon...and you would be right. However, it does hold wisdom and truth that can be applied to our daily lives. There have been a few hurdles that we at PRSONAS™ have had to deal with: tight resources, various difficulties creating a startup company, you name it. But each and every time we were knocked down, we got back up. After all, if that were not the case then you may not be reading this blog post today from your favorite tech company 😉.

After the massive success that was Silicon Valley Open Doors 2017, PRSONAS™ had an incredible time at Google Demo Day 2017 and battling it out with other impressive companies. Although we did not win the competition, in the end, we made great progress and gained the attention of both the public and investors. Fans and judges voted introductions were made, hands were shaken, business relationships were made, and inspiration flowed through all of us. You may be thinking right now, “why are you so happy if you lost the entire thing?” And to that, I say – because even though we lost the competition, we still won and are ecstatic about it.

We showed our true strength and found success. Today, let’s talk about why a loss is still a win.

It all started with a recommendation from Adam Klein, Chief Strategist of American Underground (AU). PRSONAS™ CEO, David Rose, was busy finding investors and raising awareness of our company when one day Klein encouraged Rose to apply for a national event: Google Demo Day. Every year, Google invites many high-profiles to the event to show only the most promising startup companies, and every year one will walk away as the winner. Both the public and said investors see the companies in action – so it’s in your best interest to bring your “A-Game” and be on your best behavior (if you’re like me). Even though we’ve made various breakthroughs in our journey, we continue to strive for more funding and awareness. It can be expensive to create the future, but we know that and give investors a chance to be a part of it.

Being part of the Research Triangle, in addition to previous winners being from Durham, there was a lot of pressure, but we were ready to take it all on. According to Klein, PRSONAS™ was one of the three companies that he nominated to Google itself. The AU is only one of Google Entrepreneurs’ North American Tech Hubs Network, and only 13 startup visionaries were allowed to be at Demo Day. Google will only choose a startup with the greatest strength, execution, growth potential, and vision. That’s pretty cool if you ask us. The stage is now set: we have our nomination, we’re full of energy and our CEO is ready to give the best startup pitch in history. So, let’s do this! 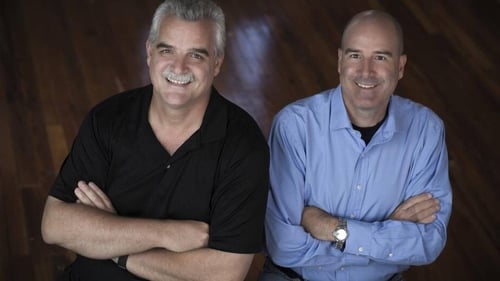 On June 8th, 2017, PRSONAS™ entered San Francisco, CA  ready to give an explosive performance. To give an idea of how extensive this event is, consider this: Google has eight technology hubs around the United States, each of which consists of anywhere from 50-150 startup companies. If you do the math (which I certainly struggle with) then that’s around 900-1000 organizations!

Out of everyone, we were in the top 13. This was a big deal for PRSONAS™

Our opposition was fierce, and they covered impressive areas such as robotic arms, medical software, and new organic foods. The judges included brilliant individuals such as Steve Case, one of the original co-founders of AOL. The crowd was hungry for some sort of breakthrough brought forth by a startup company, something that no one else has thought of already. As you can imagine, this would be a great deal of pressure to just about anyone. Despite that, David Rose rose (get it?) to the occasion and delivered a fantastic pitch and demo to all those watching.

However, as I talked about this earlier, that’s okay! Remember what I said about true strength and remember that a loss can still be a win? We may not have gotten the official title of the winner but there have been so many wonderful things that have happened since the competition. Simply being in the event itself allowed us to get more funding both before AND after it. Exposure has increased, with local media covering PRSONAS™ in articles, and attendees leaving Google Demo Day with the vision of our company in mind. Rose will certainly be busy with all the investor meetings and phone calls to attend to now. And in the end, we became friends with Steve Case! He has pledged to donate financial resources if we raised enough money for this, and thanks to everyone’s help we did just that. Utilizing his fund “Rise of the Rest,” he continues to invest in this world’s future by aiding startup companies.

PRSONAS™ has been one of the first companies to work with Durham’s American Underground, and we believe we’re making progress when it comes to traction right now. Our revenues continue to grow and so does our clientele base; we’ve been able to deploy at least 50 units so far to a variety of places such as baseball stadiums and airports! In the future, we hope to implement our machines in more areas like military recruitment, trade shows, and maybe even hospitals. Although they are currently used for greeting individuals and presenters, we believe they can move onto greater roles. One day you’ll see them doing more menial tasks (running a cash register for example) – and this will allow employees to focus on the more important roles at hand. PRSONAS™ founders, Chuck Rinker and David Rose are aiming to be able to implement the ability to understand language in units when you speak to them, as opposed to simply interacting via an iPad. This would be a tough venture to be able to comprehend and respond to diverse languages, whether they be spoken or signed. However, with the newly made friends and our favorite staff working here, I think we’re up to the task.

Our true strength will always show – we will always get back up when we are knocked down. And we have you to thank for all of this! Your support, whether it be an investment or spreading the message of PRSONAS™ via word of mouth, or just interacting with us on our social media pages is what allows us to continue to grow and create our vision.