Welcome to the nuMedia Innovations Blog 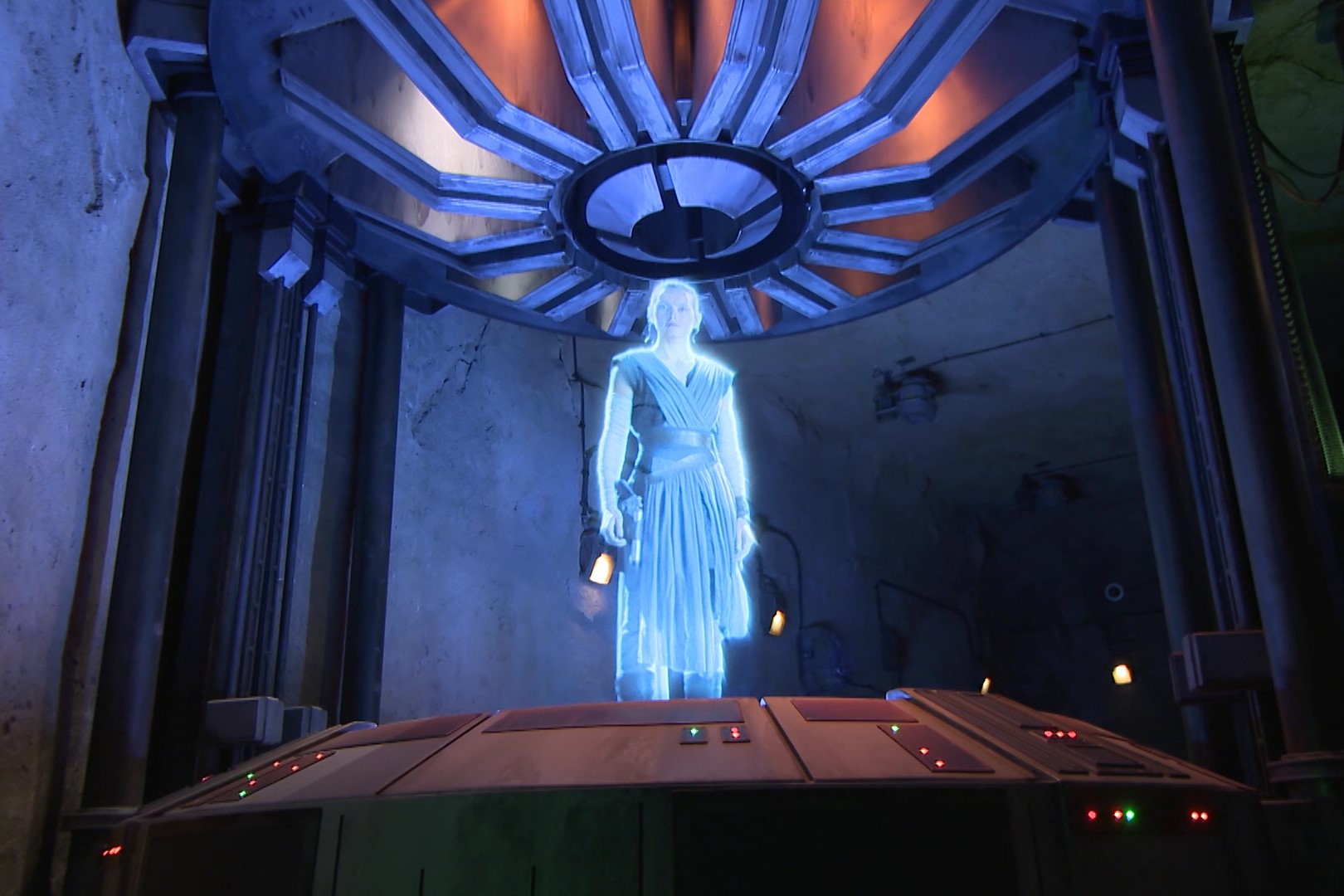 Rey in Rise of the Resistance . . . Hologram or Not?

When people first encounter a PRSONAS unit most people are struck by the “Wow Factor” of the system’s holographic look and then impressed by the interactivity and artificial intelligence of the character, A even slightly (wink, wink) more popular hologram example can be seen at Disney's amazing Rise of the Resistant experience in Hollywood Studios, Orlando. However, a few tech savvy people have quickly responded with, “Hey, that’s not a REAL hologram” and they are absolutely correct in a technical sense. So we have to ask, what are holograms, technically speaking, and what have consumers come to expect when something is called a hologram?

Ok, put your geek hat on, we're doing this! The technical definition is a “hologram” is a three-dimensional image formed by the interference of light beams from a laser or other coherent light source or a photograph of an interference pattern that, when suitably illuminated, produces a three-dimensional image. As true and precise as that definition is, what the general public has come to accept as a hologram is something very different and seemingly, constantly changing. The word “hologram” has become synonymous with a projected image that appears to have depth and volume, with the keyword being “appears”. Let’s take a look at a few examples of what people consider holographic images, but be warned, if you want to maintain your illusions you might want to stop reading now to avoid some technological spoilers!

One of the more interesting implementations most people consider a “hologram” is a Pepper’s Ghost illusion. Pepper’s Ghost is an illusion of projected and reflected light.  The effect derives its name from John Henry Pepper, a scientist who popularized the effect in a famous demonstration in 1862. It has a long history that dates back all the way to the 16th century, and remains widely performed today. You have no doubt seen examples of the illusion, such as the appearance of "ghosts" at the Haunted Mansion at Disneyland.  Examples of concert illusions based on Pepper's ghost are the appearance of Tupac Shakur onstage with Dr. Dre and Snoop Dogg at the 2012 Coachella Music and Arts Festival and Michael Jackson at the 2014 Billboard Music Awards. There are even some common uses of the effect such as teleprompters which are a modern implementation of Pepper's ghost. Take a look at the diagram to see how the illusion was created for the Tupac show. As you can see a simple projection is “bounced” off of a mirror and on to a transparent (and often polarized) sheet of film. When the balance of projected and reflected light is mixed with a properly “live” seen it creates the illusion of Tupac appearing live with Snoop, years after his passing. 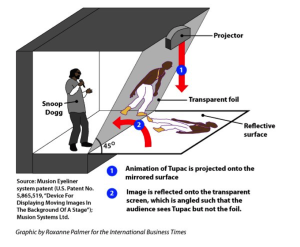 This amazing effect is a bit closer to be a “true hologram” but it is still nothing more than a fancy illusion using mirrors, high speed projection systems and a lot of ingenuity. Spinning mirror systems are used to build interactive 3D graphics and autostereoscopic for multiple simultaneous viewers around a circular “screen”. It is possible to generate a different view for each viewer depending on the angle of view relative to the subject and the projected content. Because these mirrors are mobile and gyratory they can create perspective that is different throughout a full 360 degrees in 1.5 degree increments! To create the illusion a high speed projector is synchronized to a spinning mirror. This used to be pretty tricky, but modern display systems on higher end computers have little difficulty generating frames rates high enough to sustain the illusion. The images are projected on to a spinning “diffuser” mirror that reflects the images onto a film or screen that is specially coated to allow for rear projection. 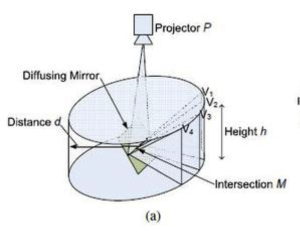 Another popular technique for creating the illusion of holography is the use of specialty films adhered to acrylic or glass. The thickness of the material creates the illusion of depth for the image that is projected on the surface of the film. A special film is used that allows for angled projection of the content on the rear of the clear surface. Though this is perhaps the least technologically advanced technique used to create a “hologram”, it is also one of the more effective and easy to implement. This also happens to be the way a PRSONAS unit is built. The image presents a “virtual” version of a person, real or animated, and allows for direct interaction with the device and the illusion, unlike the previous technologies, does not break down and lose its effectiveness at close ranges.

If a picture is worth a thousand words, a hologram must be worth a few million, and therein lies the problem. Holograms in the living room are decades away! No kidding. The technology is, at the moment, incredibly expensive and the images are not very high quality because the density of the data required to faithfully recreate a holographic image remains on the fringe, the bleeding edge if you will, of the computational power of even the modern computers. Think about this… You have just taken a photo of a scene. You have pointed your camera, clicked, and captured some information. From an optics point of view, you’ve stored some time-averaged amplitude of the light-field emanating from that scene using some form of sensor. As a result, a vast amount of information within that light field has just been thrown away. Collecting just this information is effectively capturing a tiny percentage of what’s there. A hologram (invented in 1947 by Dennis Gabor) in its most basic sense, is the recording then reconstruction of all the light-field information such that when viewed, the observer is unable to tell the difference from the original scene because the hologram is ‘giving’ the observer all of the original information. Now imagine the huge volume of data required to create that same scene in three dimensions using a laser as the imaging device and another laser as the ‘interference” device. Even a still image of a single object requires a tremendous amount of data to present with any semblance of quality. That flat image from the camera might be a few million pixels, but the number of pixels required to generate the same image is true 3-D is on the order of one or two quintillion or a million trillion pixels!!! (For the nerds out there that is an Exabyte of data per frame!) What are holograms? For now, I think we will stick with Pepper, spinning mirrors and rear-projected images, our holograms that aren’t really holograms.

What Is An Intelligent Digital Workforce?

A CRM with Legs for the Physical World?

A CRM that engages your customers in the physical world in any language with voice-first, no-touch interactions. Improving your customer's experience.

The 2.3 billion dollar per year predicted growth of the self-service kiosk industry and how companies can keep staff and employees safe with technology.